The country is reeling from its worst ever bird flu outbreak this winter, slaughtering more than 22 million poultry in a desperate bid to contain the disease that has ravaged chicken farms across the country.

The first outbreak was reported at a chicken farm in Haenam, about 420 kilometers south of Seoul, in mid-November. It was of the highly pathogenic H5N6 strain of bird flu, a new type of virus that was first detected in South Korea.

According to the sources, South Korea’s quarantine authorities set the AI big data system in motion soon after the first outbreak on Nov. 16, in an effort to stave off the spread of the crippling poultry disease.

Co-developed by the Ministry of Agriculture, Food and Rural Affairs and No. 2 mobile carrier KT Corp. in 2014, the system forecasts possible areas of infection with an accuracy rate of 90 percent by analyzing GPS information on vehicle movements among farms during the 21-day incubation period. 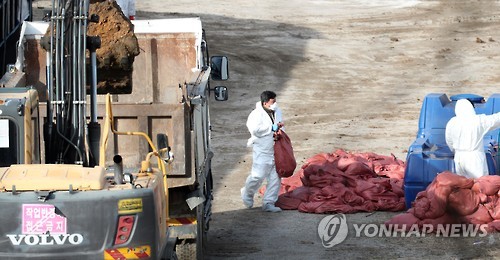 Quarantine officials slaughter chickens at a farm in Yangsan, about 420 kilometers southeast of Seoul, on Dec. 25, 2016. (Yonhap)

Five days after the first reports, the Animal and Plant Quarantine Agency singled out regions at risk of infection, informing local governments of the list and closing traffic to those areas.

But it proved to be a belated move as the disease spread at a far faster pace than expected. Unlike the highly pathogenic H5N8 strain that hit the country in 2014-15, the H5N6 spread across the nation simultaneously through wild migratory birds almost without an incubation period.

Experts said the big data system has been useless as it is designed to forecast areas of possible infection by considering vehicles as the main medium of spreading the virus.

In order to overcome the limits of the current big data system, quarantine authorities should develop a response system based on new technologies such as Internet of Things, which will likely send farmers information on outbreaks as quickly as possible.

South Korea had more than 156 million chickens and more than 9.5 million ducks as of the end of March, according to government data. South Korea culled 14 million birds in 2014.

This article was originally published on english.yonhapnews.co.kr and can be viewed in full